https://www.liveatthebluestone.com
Click here to subscribe to our text messages.From country music concerts and rock and roll, to corporate events, weddings and private parties, we’re a destination venue for your special event tickets. With cathedral ceilings, soulful acoustics you can only hear in a 115-year old church, and a staff who truly cares about delivering an amazing experience, The Bluestone is one Columbus event venue you simply shouldn t miss.
Get your Tickets to the best shows in town Now
www.liveatthebluestone.com
Agenda
Agenda
Day
Month
Week
February 2018 Feb 2018
Collapse All Expand All
Feb
9
Fri
SOLD OUT -Eli Young Band & LOCASH LIVE at The Bluestone @ The Bluestone
Feb 9 @ 7:00 pm

THIS SHOW IS SOLD OUT 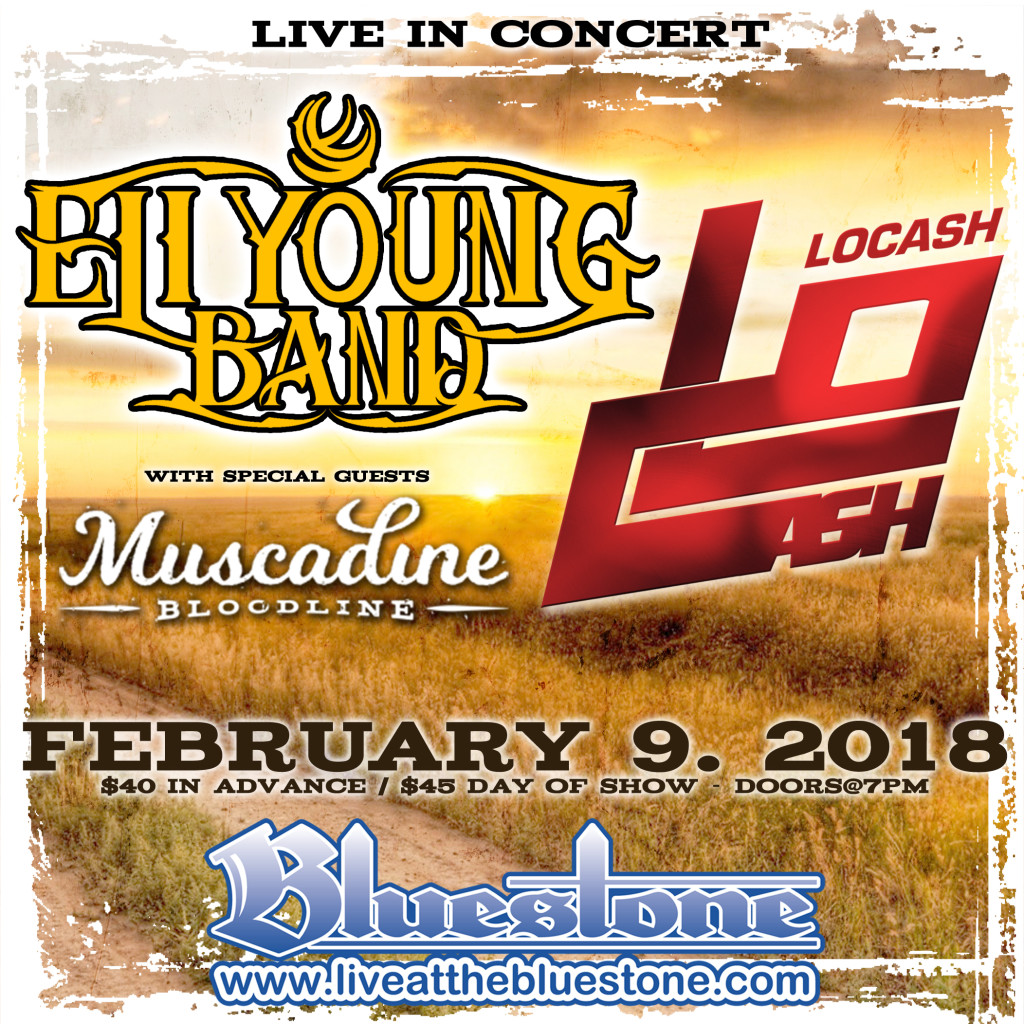 Eli Young Band Will Perform Live at The Bluestone

Somewhere in the midst of 10,000 towns, along a lonely highway between packing clubs in their native Texas years ago and more recently performing stadiums on one of country music’s hottest tours, the Eli Young Band became more than a band. They became a brotherhood. Camaraderie and creativity fused into an intoxicating cocktail that has propelled the talented foursome to the vanguard of contemporary country music.

With three No. 1 hits under their belt as well as a Grammy nomination and an Academy of Country Music Award for Song of the Year for their hit “Crazy Girl,” the Eli Young Band approached their second Republic Nashville album, 10,000 Towns, with a sense of confidence and purpose. “We were genuinely excited about making this new record,” says bassist Jon Jones. “People talk about the sophomore record being really tough to make and in a lot of ways this felt like our sophomore record even though it’s technically our fifth record as a band.”

“We learned over the progression of those records our strong points in the studio, and we were confident,” adds drummer Chris Thompson, “We knew what we wanted and how to get what we wanted.”

It’s an exciting time to be LOCASH these days. That might very well be one of the biggest understatements in Nashville. Already in their career, the duo of Preston Brust and Chris Lucas have enjoyed hit singles, sold-out concert appearances here and abroad, and have tasted the top of the chart as two of Nashville’s quickest-rising songwriters. But, to quote the old saying… You Ain’t Seen Nothing Yet.

Recently signed to Reviver Records, the duo is joining forces with some of the biggest names on the Country Music business landscape. Brust says they could feel the team’s energy from the first meeting. “We haven’t felt an energy like this since the day we began our journey. This feels like it has all come together –the right label head, the right promo team, it finally feels like we’ve got all of our ducks in a row for the first time in our lives. We’ve been out there doing the grass roots thing for so long, and to feel it all come together, is so encouraging.

Unapologetically Alabama.  There’s a new force making major waves in country music. Natives of Mobile Alabama, Gary Stanton and Charlie Muncaster came together to form Muscadine Bloodline in early 2016.  With three single releases under their belt and a schedule full of shows spanning from coast to coast, they’ve hit the ground running from day 1. Nashville took notice the first time these two stepped on the stage and it’s no surprise the rest of the music world is quickly catching on. Charlie’s [contemporary] vocals complimented by Gary’s harmonies and masterful guitar licks, MB is a powerfully refreshing mix of talent, passion and unfiltered authenticity.  Infamously undaunted by the big stage, their sound intertwines the brash irreverence of early southern rockers with the seductive quality of 90s country love songs. Captivating hooks heard in songs like “Porch Swing Angel” and the aggressively anthemic “Shut Your Mouth” stand as a testament to MB’s wide ranging music-making capability. Every song and every show is a moving experience but at the same time, unmistakably Muscadine Bloodline.

Get your tickets now!