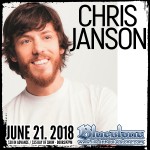 Chris Janson LIVE at The Bluestone on Thursday, June 21st, 2018! 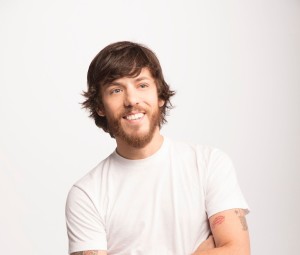 Warner Bros. Records/Warner Music Nashville country artist Chris Janson was born to entertain crowds. The electrifying multi-instrumentalist is known as much for his hit songwriting as his “infectious” (Billboard) performances, with Rolling Stone describing him as having “a mesmerizing stage presence that most arena-headlining artists would kill for.”

“Fix a Drink”, the lead single from his highly anticipated sophomore album Everybody, went Top 10 at country radio, though Janson is no stranger to the charts. In 2015, Chris Janson’s breakthrough No. 1 Platinum single “Buy Me A Boat” was the 7th bestselling country song of the year. The singer/songwriter has also penned multiple top-charting hits including “Truck Yeah” (Tim McGraw), “That’s How I’ll Always Be” (Tim McGraw), “I Love This Life” (LoCash), and over 25 additional hit songs recorded by a long list of established artists.

Chris Janson joined Sam Hunt on the road for the 15 in a 30 Tour and announced The EVERYBODY Tour with headlining dates through 2017. He has become a Grand Ole Opry regular, taking the legendary stage more than 150 times to date, and made numerous television appearances including The Tonight Show starring Jimmy Fallon, Late Night with Seth Meyers, CONAN, The Today Show, ACM Awards and ACCA Awards.